Home » Things I have learned so far » Big Screen 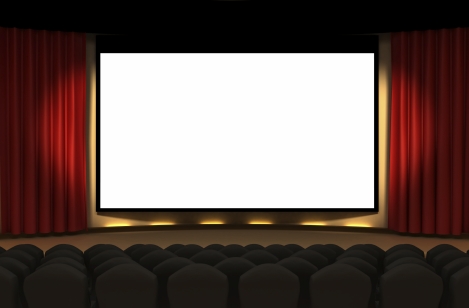 Once upon a time, everybody went to movies in theaters. It was an Event. We sat upright in fairly cramped chairs, balancing cardboard buckets of popcorn in one hand and paper cups of soda in the other, our feet sticking ever so slightly to the floor where people at the last show had spilled their soda. In winter, we bundled our coats on our laps or sat on them. We did this without thought or complaint, because it was how you saw a movie.

Of course, there were movies on television, but those were old movies. You couldn’t hope to see a newer film on TV for at least two or three years. Besides, the screen was tiny compared to the theater (especially if you had a portable television rather than one of those wood-paneled consoles). Also, you didn’t have a choice of which day, which time to watch the movie. If WPIX was showing “The Philadelphia Story” at 3:00 on a Thursday afternoon, that was when you watched it, or you missed out. The annual broadcast of “The Wizard of Oz” was a major event, preceded by warnings not to try to adjust your color television set because the first part of the movie really was in black and white.

Then came the videocassette, played on a VCR.

Suddenly, it didn’t matter that the screen was smaller, because you had the freedom to watch whatever you liked, whenever you liked. You could stop the movie while you ran off to the bathroom or wandered to the kitchen to fix yourself a snack. With a handheld control (connected to the machine by a wire that draped across the room and tripped anyone who dared to walk between you and the television), you were In Charge.

From there, we moved on to the VHS/Beta kerfuffle and the Friday nights at the video store, battling the crowds for the newest tapes. Who can forget the triumph of grabbing the last copy of a new release, or the letdown of seeing row after row of colorful boxes on the shelves and knowing there were no tapes waiting behind them to be snatched up and carted home? 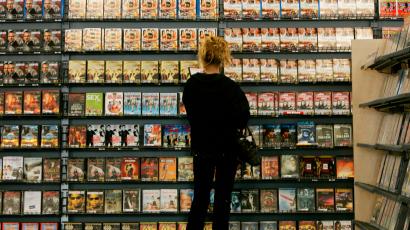 Then, on Sunday night, we would dash back to the store—having remembered to “be kind, rewind”—to deposit our videocassettes in the drop-bin in the hope of avoiding late charges.

The video store experience became its own trope, a veritable treasure trove of meet-cute and sly in-joke opportunities, such as Dustin Hoffman’s cameo in The Holiday:

In “The Fisher King,” much of the plot was built around the video store owned by Jack’s girlfriend. Tiny video stores were tucked into virtually every strip mall, and the major ones were big-box stores occupying thousands of square feet in shopping centers.  Everyone I knew had a Blockbuster card. We couldn’t imagine a time when things would be different.

All at once, life changed. We didn’t have to go to the video store, because the video store came to us. First, Netflix sent us DVDs in the mail which we were free to keep as long as we wished, with no late fees. Then, they dispensed with the physical movies altogether and introduced streaming. The remote (which was no longer physically connected to anything) placed the world of movies in the palm of our hands. With television screens getting bigger and viewing experiences becoming easier, what reason did any of us have to leave our recliners and go to the movies which—let’s face it—were getting to be so expensive anyway that you could get a month of Netflix for the price of a single ticket?

For a long time, this was my thinking.

And then, Mary Poppins returned. 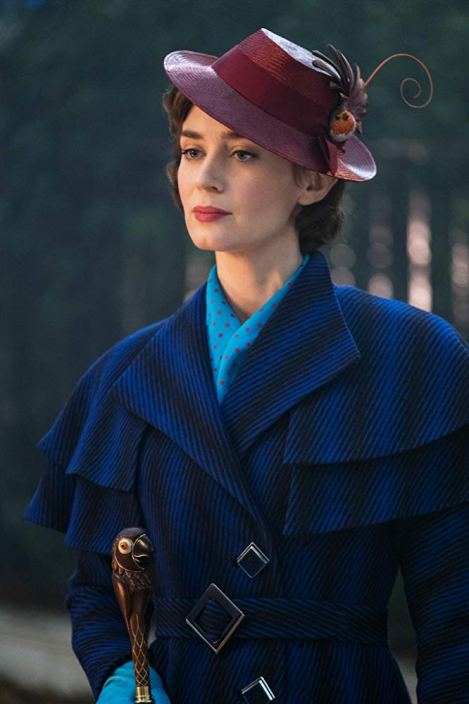 Mary Poppins was the first movie I ever saw in a theater. There was, and is, and ever will be no one to hold a candle to Dame Julie Andrews. So when I heard that Emily Blunt would be the new Mary Poppins, I was initially skeptical. As the premiere date drew closer, the buzz was favorable. Then, I saw an article indicating that Julie Andrews approved of Emily Blunt’s performance.

If Dame Julie approved, that was good enough for me. 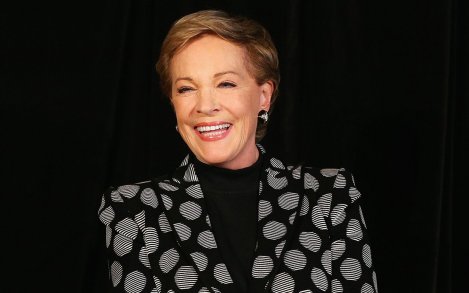 And one thing was certain: there would be no waiting until this one showed up on Netflix or Prime.

For Mary Poppins, I would go to the theater. On opening day.

A few days before my chosen date, my friend Donna agreed to accompany me. Since she and her family are regular moviegoers, she tipped me off to ways the theater experience has changed. At her recommendation, we purchased D-Box seats. D-Box is an immersive sensory technology that enhances your experience by enabling you to feel some of the physical aspects of the action. In “Mary Poppins Returns,” this meant that when Lin-Manuel Miranda rode his bicycle over the cobblestone streets, we felt the rumbling beneath our butts. When movement onscreen swooped from one side to the other, we felt swooping as well. 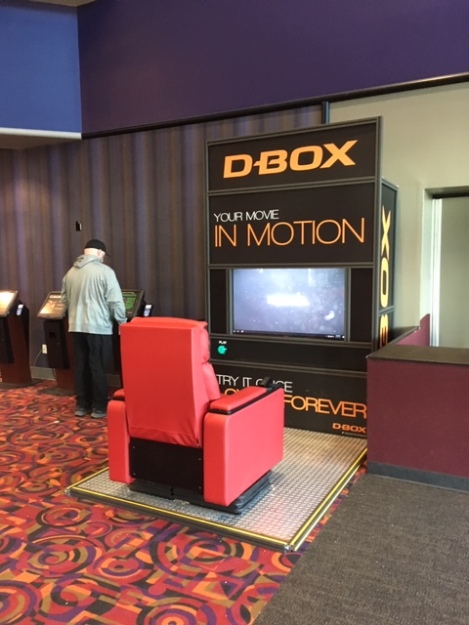 For those who want to test-drive the D-Box before their movie.

The sensory experience wasn’t the only surprising new thing I discovered that day. Turns out that now, seats are now reserved. Thus, there is no more racing to get in early for a good seat: you have your ticket for a particular spot, just like in a Broadway theater. Even better, the upright cramped chairs have been replaced by luxuriously cushioned faux-leather recliners with a heating function in case you should become chilly. No more balancing of snacks and drinks; a tray table with an inset for beverages can be pulled across your body so you don’t spill, or it can be swung out, in line with the chair arm to stay out of your way. Even if you’ve reclined as fully as the chair allows, there’s still plenty of leg room for others to pass by. 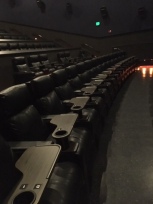 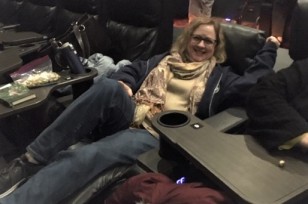 The screen that lets you see a thousand little details you might never have noticed on the smaller screen at home. Expressions on background actors. Shadows (intended or not). Gradations of color.

Yesterday, Donna, her husband Alex, and I went to see “My Fair Lady” on the big screen. 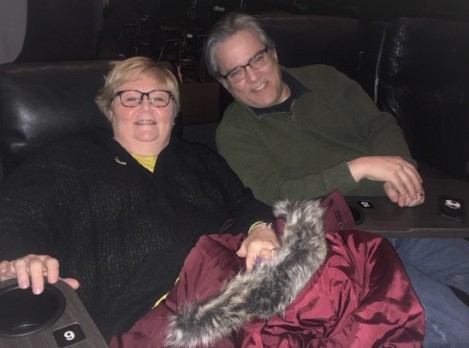 I’ve seen that film dozens of times, but never like yesterday. I’ve always known it’s a big, lush, colorful musical, but I never realized just how artfully scenes like “The Ascot Gavotte” were assembled. The color scheme is largely black and white, but the women don’t all wear the same shade of white. Professor Higgins’s mother wears quiet silver, and the other woman in their box wears a pale taupe—enough to distinguish them, but not enough to make them appear out of place. Then comes Eliza, who is wearing proper black and white—but with a red flower in her hat and a bit of red on her parasol, a dab of color that lets us know she does not yet fit in.

On the smaller screen, the focus is on main character and movement. On a larger screen, in the darkness of the theater, a myriad of details become evident. The viewer becomes immersed in the entire world, rather than simply hearing dialogue or focusing on whoever’s face is central in the frame.

Another advantage to the theater is the lack of distraction. When I watch a movie at home, I’m often doing something else at the same time—flipping through my phone, checking imdb.com to see who a familiar-looking actor is, getting up to make tea, talking to the cats. In the theater, though, there’s nothing to do except watch the movie. So watch we did, and the experience was rich and lavish, as if we’d been immersed in a cartload of flowers so vividly hued we could almost smell them.

For some movies, it probably doesn’t matter all that much if you see them on the big screen or the small. As much as I like “Kramer v. Kramer,” I don’t feel any particular need to see it in a theater. Most of that film happens in small spaces—an apartment, a courtroom, a restaurant—and it matters little to me whether those small spaces are made bigger on the screen.

But big films with production numbers or vast scenery or intense effects—those need a different venue.

Which is why my next big-screen film will be the 80th anniversary showing of “Gone With the Wind.” Until now, I’ve only seen GWTW on television. Now, I’m already imagining the barbeque at Twelve Oaks, the fiery red sky as Atlanta burns while Rhett and Scarlett flee. Swirling hoop skirts. Hundreds of bleeding soldiers lying on the battlefield. Scarlett alone, a tiny figure in a vast field, raising her fist to the sky as she vows that she’ll never be hungry again. 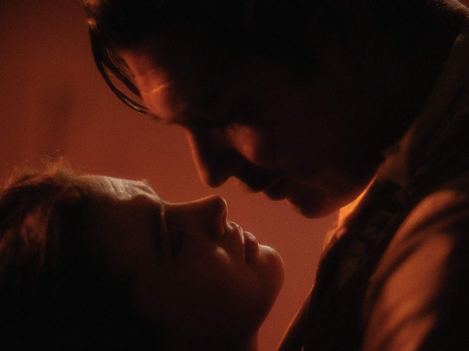