Home » Things I have learned so far » Vinyl

It all started with the “Wedding Day at Troldhaugen.”

On Saturday afternoon, as I sat at my desk working on a client’s rush project, one of my favorite classical stations began playing this delightful piece by Edvard Grieg. I say “delightful,” but for all I know, it could be part of something weird and dark. (After all, Grieg is the same person who wrote the Peer Gynt Suites No. 1 and 2, and Peer Gynt is not exactly a bright and sunny tale.) “Wedding Day at Troldhaugen” (I’ve also seen it as “Trollhaugen,” but no matter) is a lovely little piece, full of pomp and ceremony and enough trills to make you envision an adorable couple, she in her frothy white wedding dress and veil and he in his top hat and tails, both of them stout little people with apple cheeks and slightly shy smiles, emerging from an old stone church in the lush green countryside amid cheering townsfolk. It may well have been the best six minutes of my day.

Grieg wrote this piece for the piano, and many pianists have performed it masterfully. Still, my especial fondness is for the orchestrated version. I’ve searched online, but for my money, the best recorded version I’ve encountered so far is the one recorded by the Houston Symphony and played yesterday on WCPE online. If you can find it, get your hands on it forthwith.

But I digress. (Pause for shocked reaction.)

As I scrolled through the admittedly-limited purchase options for the “Wedding Day at Troldhaugen,”  it occurred to me that I might already own this piece. You see, back in the 1970s and 1980s, supermarkets and gas stations used to give out freebies or deals to get you to shop there. One gas station gave out glasses and steak knives; upon information and belief, the latter could cut through literally anything. You could probably have performed surgery with them if you’d been so inclined. The Stop & Shop Supermarket went through a period where you could purchase a set of not-terribly-attractive brown stoneware, a different piece each week. For reasons I’m not certain of, my mother bought each week’s offerings. My cats currently use two of the cereal bowls for food dishes.

At one point—I think it was in the early 1980s, after I came home from college—Stop & Shop decided to release a set of classical music albums. Each record came with an insert of approximately ten pages which, when all assembled, would comprise the Funk & Wagnalls Illustrated Encyclopedia of Music. Because that’s what grocery stores did in the Good Old Days: they cared about your cultural appetite as well as your physical. 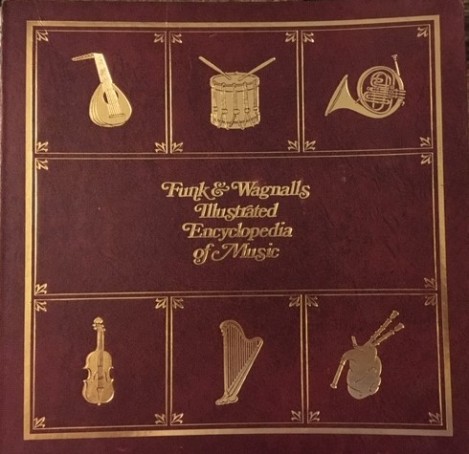 Vinyl, as we know, is making a comeback. I don’t know what triggered it, but I find it enormously amusing. Everyone who threw out their records is now wishing they had them back. The clueless wonders who thought their turntables were obsolete when CDs came along are now frantically searching online for replacements.

You see, there are those of us who never got rid of our records or our record players (as we called these items back in the day). While the rest of the world KonMaried the shit out of their homes, some of us said, “Phooey.” We found a place for them, and when the mood struck us, we’d toss a side on the turntable and listen to “Rocky Mountain High” or the fifth Brandenburg Concerto.

This evening, I pulled out all my albums and 45s in search of Grieg. It was a whirlwind trip down Memory Lane. Among the things I found were my parents’ soundtrack albums of Camelot, My Fair Lady, West Side Story, and The Sound of Music.

I also found Mary Poppins, which was my very first album, purchased by my parents the day after they took us to see the movie, which was the very first movie I ever saw in a theater.

(For the record: I saw a tweet this week where the challenge was to be able to sing an entire soundtrack, start to finish, without missing a word. I could do this right now with The Sound of Music and Mary Poppins, and I wouldn’t even have to brush up. Just saying.)

I also found the records I acquired during my adolescence. Nobody was ever going to confuse me with one of the cool kids, but my record collection confirms this. I have at least half a dozen John Denver albums, plus the Partridge Family because no matter how you slice it, they were fun. I also collected soundtracks from Pippin, A Chorus Line, and other popular shows. Somewhere along the line, I also bought 45s of whatever song struck my fancy, including gems from Bobby Sherman and Lulu. 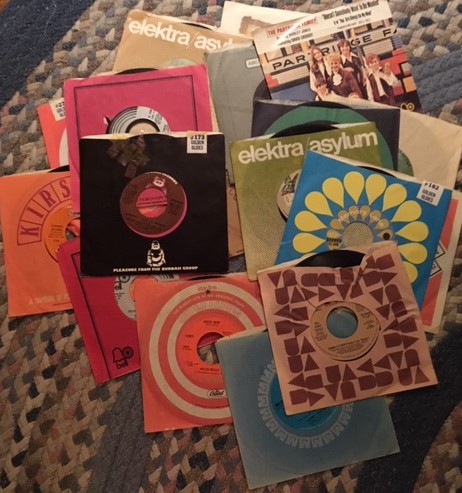 In college—a Christian college—I accumulated the likes of Evie, Chuck Girard, John Fischer, and a folk duo called Mickey and Becki whom I wouldn’t remember except for the fact that my first date with my first boyfriend was at a Mickey and Becki concert. (Thanks, you two.) 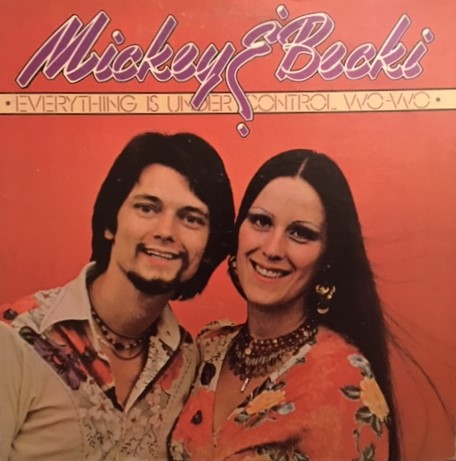 Just before Christmas break during my freshman year, the girls on our floor gathered for a Christmas party. Unbeknownst to us, our resident assistant had written home and asked our parents to send gifts. I don’t know what possessed my parents, but in a very uncharacteristic move, they sent a box set of Handel’s Messiah.

After college came the Stop & Shop classical sets, as well as Jane Fonda in the pre-VCR era, when you put the record on the stereo and tried to figure out what to do by listening. (It didn’t work particularly well, which is likely why Jane started doing tapes as soon as technology allowed.)

Vinyl took a hiatus after that as cassettes came into vogue. Sadly, nobody predicted the way cassettes would deteriorate. As a result, much of my music collection from the 1980s and the early 1990s is now defunct.

My CD collection is still viable, but it shows no more coolness than my 1970s record collection: more classical, Christian, folk (Livingston Taylor and Mary Black), and whatever category you assign to the likes of Joshua Kadison, Vonda Shepherd, and Billy Joel. If you’re looking for badass, musically speaking, you need to talk to someone else. I have a container of CDs in my car that includes everything from Jeremy Camp to Hershey Felder to Paula Poundstone.

After that came the whole streaming thing. While I’ve streamed, I admit to not being a fan of the mechanism for one simple reason: if I buy something, I want to own it. I want to have access to it for the rest of my life. I don’t want to be dependent on whether a particular platform exists. I don’t want to be at the mercy of some tech giant that may decide it’s offering something this week, but not next week. It’s not for nothing that I have an entire bookcase filled with DVDs: I can watch whatever’s there whenever I want, regardless of what Jeff Bezos wants to make available and at what price. (Example: at Christmas, I wanted to watch “The Bishop’s Wife.” In a supply/demand move, a certain online behemoth suddenly decided I should have to pay $9.99 for the privilege of streaming it. So this evening, I bought the DVD—brand-new, factory-sealed—on eBay for $2.97. Eat my dust, Jeffy.)

Which brings us back around to vinyl. The nostalgia factor is apparently a large part of vinyl’s comeback. Some people are trying to get their hands on the original soundtrack to “The Last Sweet Days of Isaac”; it’s sitting in my bedroom. Ditto with Imus in the Morning doing “1200 Hamburgers to Go” or David Frye’s “Radio Free Nixon.” When my dear friends retired and downsized, they bestowed on me much of their vinyl collection, including lots and lots of Bruckner and Dvorak.

Browsing through my albums is a visit to times past. Proust did it with a madeleine; for me, it’s “Rocky Mountain High.” I remember being in high school and putting on that record; I’d turn out all the lights and listen to the music, the melodies and harmonies and images. I suppose I could do the same thing now with a CD or a streaming service, but the physicality of vinyl—handling the record, placing the arm, hearing the slightest click as the needle moves into the first track—keeps me involved in a way other delivery mechanisms don’t. Plus, at the end of the side, no matter what else is happening, I have to get up and lift the arm, flip the record over, set the needle again. These tiny tasks serve as gentle reminders that I can only move so far from the reality of my surroundings. For some people, vinyl’s demands might be chores or burdens; for me, they’re reminders of days gone by. Digital sound might be cleaner and clearer, but there’s something about the slight hiss and crackle that serves almost as a prelude to the soaring voice of the incomparable Julie Andrews.

Sadly, Funk and Wagnalls didn’t include a Grieg record in their collection all those years ago. Neither was there any Grieg in the collection my friends bestowed on me before heading off to greener pastures. In all likelihood, if I want my own copy of the orchestrated version of “The Wedding Day at Troldhaugen,” I’ll have to track down a CD of Grieg’s lyric pieces. Still, I can’t help thinking how nice it would be to find it in vinyl, to set the stylus on the track and hold my breath, savoring that moment before the music begins, that instant of silence when anything is possible. 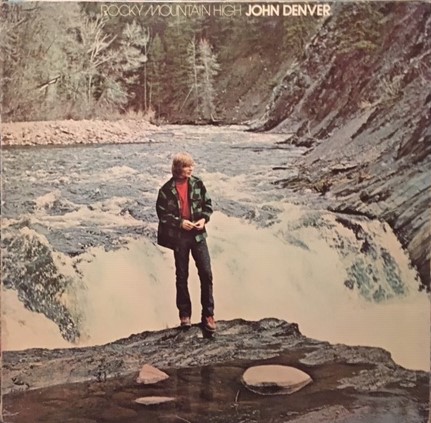