Home » Things I have learned so far » Perspective

To say this morning did not start well is an understatement. Two days after the promised response time on a submission, I received an email informing me the story had been rejected.

But this wasn’t just any rejection. First, it was a group email, with everyone’s addresses showing. (Don’t even get me started about that. Words like tacky and insensitive come to mind.) Second, this rejection came from the same people who published my award-winning story last year. It seemed like a guaranteed acceptance. Instead, this was the literary equivalent of a high school senior not getting into her safety school.

Every writer who has submitted has been rejected. Stephen King stuck his rejections on a nail in his wall; when there were too many for the nail, he drove a spike into his wall and impaled them there. When she was in her thirties, Madeleine L’Engle—who had already published books—was unable to get a single thing published for an entire decade. Janet Evanovich spent ten years writing–including three books that never saw the light of day–before she was finally published.

Besides, I told myself, I already get paid to write. As soon as I finish this blog post, I’m going to get back to work on an appellate brief for which I have a retainer. Someone is paying me to craft his argument. That must mean I can write, right? Granted, the Court isn’t going to decide in my favor based on the brilliance of my prose, but it could rule against me, which would be its own kind of rejection. Still, it makes me a writer, doesn’t it?

With all this in my mind, I went on Facebook, and I saw Houston.

Streets that look like rivers. People trying to escape, trying to survive. One story earlier today said there have been more than a thousand water rescues “so far”. A hospital has stopped taking patients because with water around it, it is effectively now an island. The 911 system at capacity. Freeways so deluged that water was lapping at overhead freeway signs. People begging on Twitter for rescue. A woman dying while trying to get out of her flooded car. More than two hundred high-water locations on the roads. Nursing home residents in flooded facilities, waiting to be evacuated. People stuck in attics and on roofs. More than 82,000 people without power.

The sky here in Connecticut is blue, with puffy white clouds. The summer sun shines. The birds chirp. The squirrels dash across the lawn. My refrigerator hums. A gentle breeze drifts through the screen. The laundry air-dries on the racks. Next door, children play outside. The cats are curled up on chairs and beds, napping or bathing. My house needs vacuuming. My loved ones are safe.

The tacky rejection (as it will ever be known) still stings. It’s a disappointment. It raises questions about whether the story needs work or if this just wasn’t the right publication. But it’s not a catastrophe.

What’s happening in Houston is a catastrophe.

My prayers are with them.

I originally planned to end this post with those stirring words. It would have been uplifting, encouraging, magnanimous. But it wouldn’t have been honest. Because the truth is that knowing how badly someone else’s day sucks doesn’t make me feel better. This isn’t a competition. Worst Day doesn’t win.

Besides, there are people around the world who are having worse days than the Texans suffering under Harvey’s wrath, whose every single day makes the Houston folks’ experience look like a walk in the park. People who spend their days in screaming agony from an incurable disease, in abject terror that their assailants will return, in heartbreak beyond all measure as they watch their children die from a lack of food. People who are victims of more horrific acts than any of us can imagine in our worst nightmares. People who aren’t going to benefit from scores of charitable contributions, who don’t have insurers to cover their losses. People whose suffering has no foreseeable end. No matter how terrible your day is, there’s somebody out there who can top it.

But as I said, it’s not a competition. It’s life. For every time we have it better, there’s a time we have it worse. All of us slide up and down the continuum. Some people get to one end or the other more often, or for longer periods, but eventually even they will slide again.

For me, today has been a series of minor league disappointments. A story rejected. A chance at first-hand research I had to pass on to meet a work deadline. The challenges of dealing with, and trying to fix, someone else’s mistakes. The annoyance of not doing things I needed to so that I could handle these other matters.

The fact that these are minor league disappointments doesn’t mean they’re not real. It doesn’t mean they don’t bother me, or that they shouldn’t. It just means that I need to keep them in perspective. I can acknowledge that the tacky rejection hurts, but I can choose not to let it control my life or my opinion of my work. I remember a story from the contest I judged: I loved that story and truly believed it should have won, and in the end, it didn’t even place because of other judges’ subjective opinions. For all I know, that’s what happened to my story. If I learned one thing from that contest, it’s that the story that wins isn’t always the best story. (A point I need to remember whenever I look at the plaque hanging on the wall of my office.) 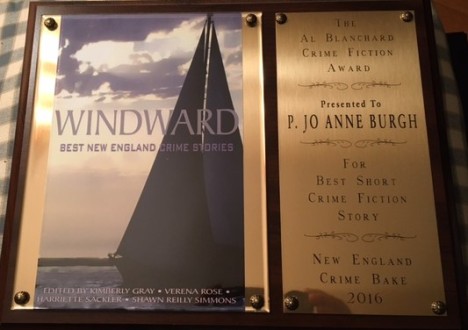 Perspective doesn’t mean disappointment and hurt aren’t real. It just means that tomorrow morning, I’ll wake up and find that they’re a little softer. I’ll still be disappointed. I’ll still grapple with the hurt. The feelings are real, and they don’t vanish overnight. But I’ll be okay. Maybe I’ll even tuck those feelings away for a few minutes, long enough to do what I need to do.

Because even when things aren’t great, it’s important to remember that they could be worse.

Note: if you want to help the people affected by Hurricane Harvey, be careful to do your research before donating to a particular charity. Sites like Charity Navigator are compiling lists of highly-rated organizations that are providing assistance.