I first heard about the 100-day project on September 1, when violinist Hilary Hahn posted that she had practiced the violin for 100 days straight.

Apparently, there are all sorts of 100-day projects and challenges for everything from developing your creative side to reaching personal goals. The true purpose of many of these challenges seems to be building good habits (such as “Floss every day for 100 straight days.”).

Personally, I like habits. If you’re in the habit of doing something, you don’t have to think about it, and I’m a big fan of having fewer things to think about it. I once read an interview with a dancer who went to dance class every day. She compared this daily practice to drinking her morning orange juice, i.e., not something she decided each day, but something she automatically did. This approach that appeals to me, because I’m capable of spending all the time I would have spent doing the thing just deciding whether to do the thing.

The official 100-day challenges seem to involve a lot of extra work, such as Instagram postings and community comments. Rather than sign up with one of them, I decided to make my own:

Since mine is a self-designed project, I have room to be flexible. For example, I’ve decided that while the writing in question must be creative—legal briefs do not count—it doesn’t necessarily have to be fiction. As a result, some days have involved journalling about writing, which can include brainstorming ideas for present or future projects. Also, writing blog posts (like this one) counts. (Since I’m already committed to posting here on alternate Mondays, I debated whether I should count blog posts, but the project administrator said it’s okay, and he runs a tight ship.)

Just as the internet is replete with 100-day projects and challenges, so also is it teeming with advice on how to perform them. I’ve seen recommendations that the new habit or steps toward the goal shouldn’t take more than 20 minutes per day, the idea being that nobody can sustain such a habit longer than that. (The floss people would probably agree.)

I haven’t set a minimum writing time for the project, but in general, my target writing time is an hour each day. There are days when I have to cut it short due to deadlines or appointments, but so far, I’ve found myself meeting or exceeding that timeframe on most days. Again, not having to decide things is key: most mornings after ADLs, I make the same breakfast (egg sandwich and tea), take the breakfast tray and the laptop into the office, and set everything up on the treadmill desk. I keep my walking shoes next to the treadmill. From there, all I have to do is push some buttons, and I’m walking and writing. An hour later (the treadmill keeps my time for me), I turn everything off and move on to the rest of my life.

“Sure, that’s great for you,” you say. “But I don’t have a treadmill (much less a treadmill desk), I can’t eat eggs, I hate tea, and I don’t have time to do all this in the morning anyway because I have to get the kids out the door for school before I brave the commute to my office. So how am I supposed to write every day for 100 days?”

Take heart, my friend. Set up the structure however you like it: write for five minutes every morning while the coffee drips into the pot if that’s all the time you have. The point is consistency. I’m just telling you what worked for me: establishing a mindless routine to serve as the backdrop for the thing I really want to be doing, i.e., the writing.

Author Matthew Dicks, who teaches fifth grade, writes books and essays and articles and daily blog posts, has a wedding DJ business, has a storytelling business, and has won the MOTH storytelling competition multiple times—in addition to being a husband and father—routinely fields this question. Among his strategies: instead of going out to buy lunch every day and hanging around with the other teachers, he brings oatmeal, eats it, and spends the rest of his lunch period writing.

I’m not saying I never break my routine. Today, I skipped the treadmill and the egg sandwich in favor of a chair on the porch and a bowl of Cheerios with the last of the blueberries I picked a few weeks ago. Before writing, I read the paper and a variety of article online. I even did the Jumble puzzle (inexplicably tucked into the travel section of the Sunday paper). The cats wandered out here and back inside, according to their whims. I made a quick trip to the grocery store, and I’ve done some minor housework (bare essentials, but not enough to disturb the peace of what may be the last summery Sunday until next year). But I also brought out my journal and a pen, and now the laptop so I can write in a leisurely fashion. Which I’m doing, so it counts.

What matters is committing to do for 100 days this great important thing that you’ve been dreaming about. The rest is details.

Because here’s what I’ve learned in the first 24 days*: it works.

Making a plan and sticking with it, even when it’s tough, is infinitely better than looking back at the end of that same 100 days and not being any further along than you were 100 days ago. 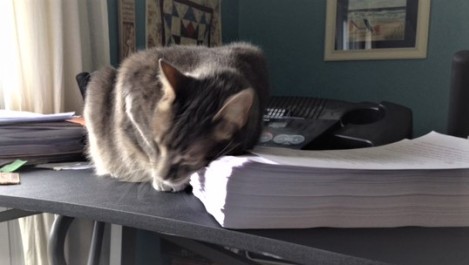 Plus, having the 100-day goal may alter your mindset. Consider this example:

On Day #2, I started a story that seemed to have potential. Within a few days, I’d lost interest (probably because nothing interesting was happening).

I had two choices: start a new story, or push on with this one. As is my habit, I abandoned the uncooperative story and started a new one.

The new story’s problem was that I had no idea what it was. I had a premise—someone dies unexpectedly—but I didn’t know if it was a murder mystery or a character study or something else entirely. Among other things, I didn’t know how the guy had died: was he murdered, was it an accident, or did he take his own life? I kept writing in the hope that the story would reveal itself to me, but eventually, I bumped up against the inevitable wall. 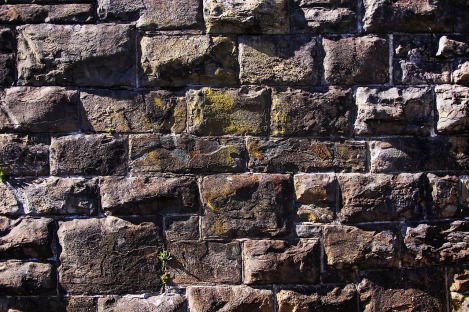 In the past, I’d have used this as an excuse to start yet another new story. This time, though, something occurred to me: I’d made a commitment. A promise to myself. I had to keep writing, whether it was this story or another one.

Rather than spend my 100 days starting 50 new stories that would languish unfinished on my hard drive, I decided to see what would happen if I stuck with this troublemaker. I spent one of my writing periods brainstorming plot lines, jotting notes, doing quick research to see if I was completely out in left field, jotting more notes, casting and recasting the roles, and finally coming up with what seemed to be a real possibility. The next day, I returned to the story to find that none of the ideas I’d generated the day before were going to bear fruit, but another avenue presented itself. The next day, another popped up, and still another the day after.

Every day I have returned to that story, more choices appear. It’s not finished, and I’m still unclear on how the man died, but I’m closer. I’ve deleted bits from the original draft that led in directions I don’t want to pursue (although I’m saving them in my “extra language” document, just in case). More importantly, I’m working the story instead of leaving it to languish until the day I happen to feel inspired (which, let’s face it, would probably be never).

Because I’m committed to showing up to write every day, the story is showing up, too.

That’s Lesson #1 from One Hundred Days of Writing:

If I keep writing even when it’s not easy, I can make real progress on a story I might otherwise have abandoned.

If you’ve tried any of the 100-day projects or challenges—or you’d like to—please post about it in the comment section below. We’re a small group here, but we’d love the chance to cheer you on!

*Full disclosure: I started my One Hundred Days of Writing on September 1. I was feeling low about a number of things and wasn’t certain whether this notion would get out of the starting gate. I didn’t mention it to anybody for the first few weeks, because I wanted to feel secure in the idea that I could do it before I told the world. (Okay, maybe the entire world isn’t reading this blog. Before I told you.) But here we are, nearly a quarter of the way through. So far, so good. I’ll keep you posted.

3 thoughts on “One Hundred Days of Writing”