Home » Things I have learned so far » The New Tenants

This morning, I woke to a chorus of chattering birds. At risk of anthropomorphizing, I’d have to say they sounded irritated, agitated, and/or downright pissed off. I didn’t understand why they’d be so stressed until I opened the front door and saw this: 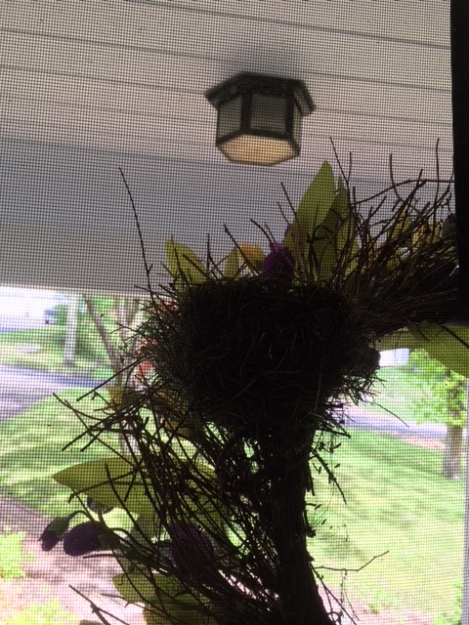 I thought I’d outsmarted them. Three years ago, when I hung this grapevine-and-twig wreath on the screen door, I noticed almost immediately that birds were stealing the twigs.

Okay, whatever. That’s what birds do: gather twigs to build nests. No big deal.

Two years ago, the birds got bolder. I opened my front door one morning and discovered that they’d built a nest that balanced between the wreath and the front door. Personally, I can think of many spots around my property that would be far less precarious, but maybe they liked the shelter. In any case, what was done was done. For the next few weeks, until the babies hatched and flew the nest (literally), I couldn’t use my front door for fear of disturbing the wreath’s fragile balance, to the detriment of its tiny inhabitants.

Last year, as soon as I saw the first evidence of intent to build, I took action. On my mother’s suggestion, I moved the wreath from the front door to the side garage door. It was a perfect solution: I traveled in and out of the house at will, and the finches were able to raise their little ones in peace. 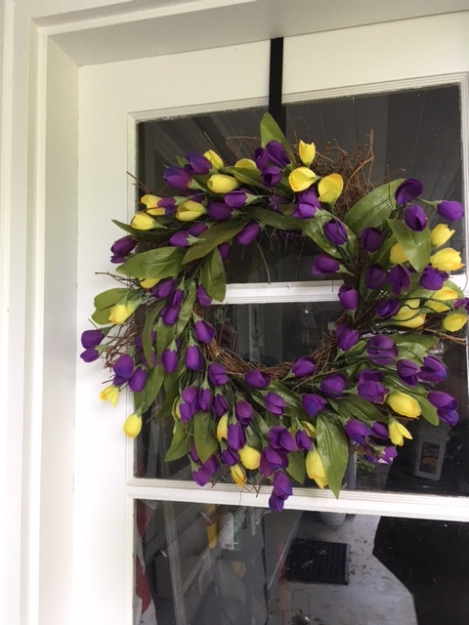 What I failed to realize was that in their little birdy view, that location was apparently substandard.

This year, I waited before hanging the wreath. When I did, I placed it on the front door and waited to see if I needed to move it. The first time I saw twigs on the step, I knew it was in play.

I moved the wreath to the garage door and waited.

The wreath was undisturbed.

(If this were a Victorian melodrama, the stage direction would read: Chord of music.)

I knew it wasn’t a matter of birds having left the premises, because the ones who usually build in the eaves over the garage are in residence, swooping over my head as I walked pass.  So I assumed the wreath-dwellers had moved on, perhaps to a hanging basket across the road.

That was when I made my cardinal mistake:

I moved the wreath back to the front door.

The move took place on Friday. Saturday was cold and rainy. I saw no evidence of construction. Foolishly, I relaxed.

By Sunday morning, they’d built an entire nest and were already perched on the wreath, bickering, one assumes, about window treatments or flooring choices. 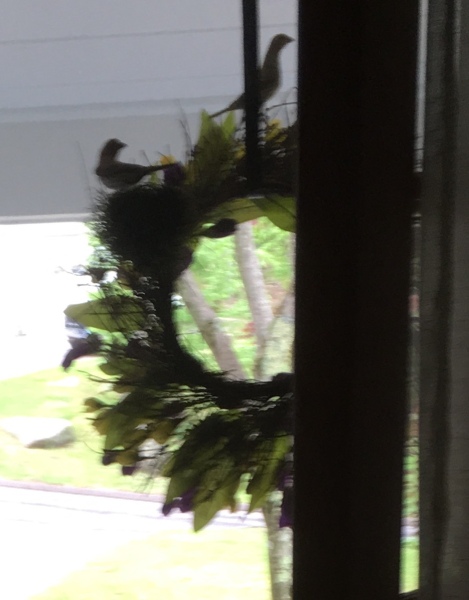 Pardon the quality. They’re not fond of the paparazzi. As soon as I appear, they leave.

There aren’t yet any eggs in the nest, but it doesn’t matter. The finches have won. They know from past experience that once they’ve established their residence, I won’t do thoughtless things like open the door and risk knocking it down. They are now free to lay eggs, to hatch them, and to raise their little ones at their leisure, while my guests and I enter the house through the garage.

Eventually, the finch babies will fly the nest, and the parents will abandon it. When they do, my right to use my own front door will be restored.

In the meantime, the cats and I will have to listen to Mr. and Mrs. Finch arguing about what color to paint the nursery. 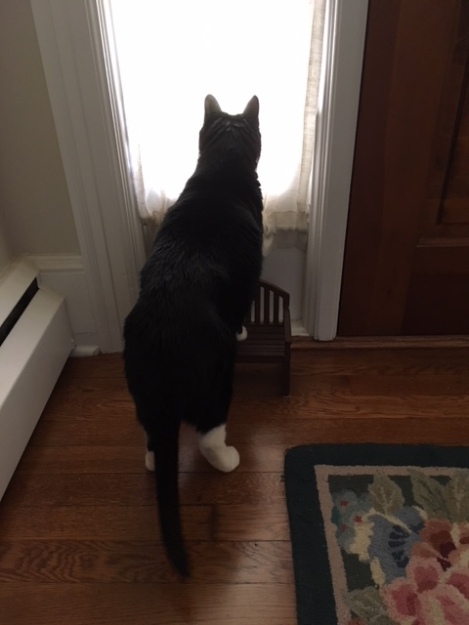 2 thoughts on “The New Tenants”