Home » Things I have learned so far » Lists 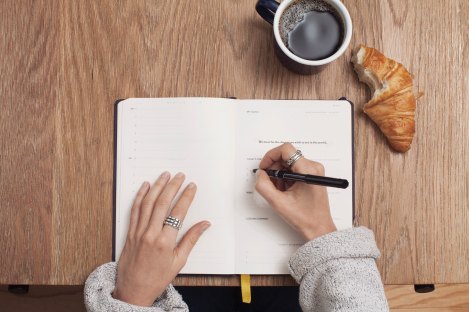 My wise friend, Dacia Ball, recently gave a talk to a women’s breakfast in which she discussed, among other things, lists. Since I am a huge fan of lists, her remarks resonated with me.

I adore lists. They’re so concrete, an irrevocable record of intent: I’ll get to it, it’s on my list. Putting an item on the list ensures that it will not be forgotten or overlooked. On the list, it’s real. It has value, a place in my schedule.

Few things are more satisfying than checking off an item on the list: Ta-da! Look what I accomplished! On the (not infrequent) occasion that I veer off the list and perform an unlisted task, the remedy is simple: add it to the list and immediately check it off again. A strange habit, to be sure, but I’ve discovered that I’m far from alone in this. It’s as if we think someone is going to check to see how we’ve spent our day, and we won’t get credit if the task doesn’t appear on the list. 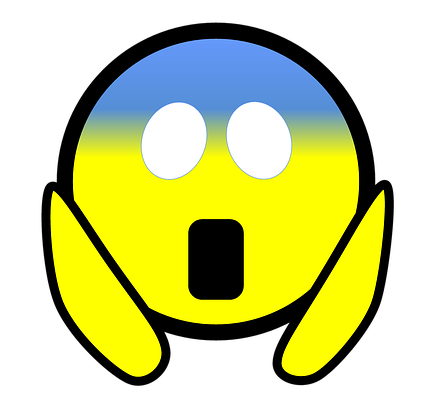 Last weekend, I skipped the list-making and went straight to the chores. This wasn’t a deliberate shaking-up of the routine; I simply became caught up in what I was doing. By Saturday evening, I was so impressed with all I’d accomplished that—you guessed it—I made a list of what I’d done. Well done, me. 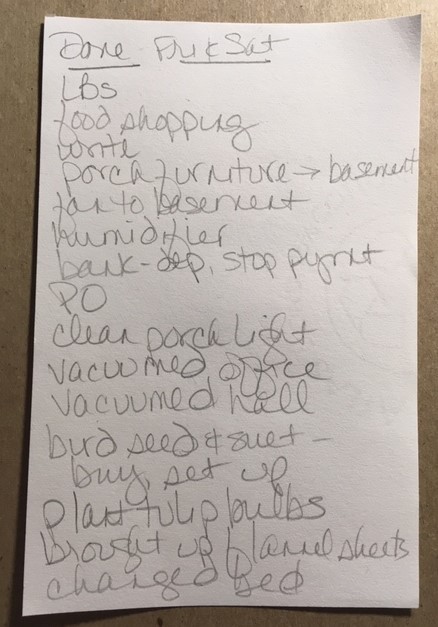 The odd moment comes when I cross off the final item. The fleeting sense of now what? crosses my mind. What should I do now? What other obligations do I have? Surely something needs to be done. Another errand is lurking somewhere. Someone must need for me to take care of some project. Who am I if I have no to-do list?

And so the list is frequently far longer than I can ever hope to finish in a single day. Ah, the comfort of knowing that I am needed, as evidenced by the list of things only I can do.

It would take no effort at all to jot down a quick list of things I should do today:

As Dacia said in her remarks to the women’s breakfast, women prize productivity. The list, first made and then checked off, is proof positive that we have been productive. When I’ve accomplished everything on this list, surely everyone will be impressed with my diligence. 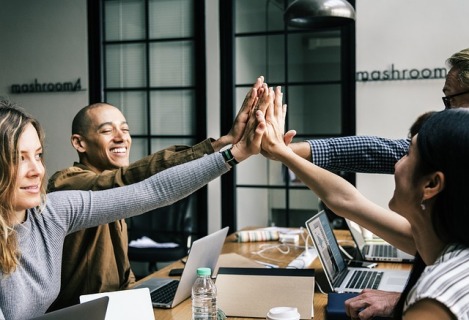 A closer look reveals another, subtler point. As long as I have things to do, I must be necessary, and therefore, I must remain here to do these things. In a bizarre way, having an over-long list hints at the idea of being immortal. 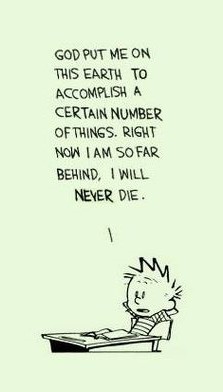 Perhaps the most ironic thing is that it’s now past 3:00 in the afternoon as I write this, and I have not as yet done a single thing on my list. Instead, I have fed and fussed over the cats, brought in the paper, made my own breakfast, read articles about yesterday’s tragedy in Pittsburgh, made a donation, and posted on social media urging people to vote next week. The appellate brief in process remains strewn over my desk; the file of agent queries has been moved to the floor by the treadmill; the now-dry laundry hangs patiently in the basement. This post will be completed soon; the wine will be purchased, the Jumble completed. Other than that, right now it’s anyone’s guess how far I will get on my beloved list.

Some might ask what the purpose of the list is if I’m not going to follow it anyway. Excellent question. Security, perhaps. A way to ensure that I don’t forget what I need to do, which is a very real risk these days. Evidence that I have significance in this world, that I am relied upon to perform services and fulfill responsibilities.

Or maybe it’s just a way of ordering the chaos that swirls with ever-increasing madness. It’s easy to be sucked up into it, to lose our way in the darkness. And so, the to-do list is straightforward. It doesn’t include massive goals like “write next novel” or “lose forty pounds.” The appointed tasks are precise, measurable, manageable. Either I finish the blog post or I don’t. I repot the lavender, or I leave it as it is and it dies. I do the brief, the Jumble, the laundry, or I leave them undone. No nuance, no need for interpretation. Simple. Concrete. Either/or.

Maybe that’s the true appeal of the list. Time is such an amorphous concept, but a list imposes order: This is how my time will be spent. That capturing time is no more possible than corralling a cloud doesn’t matter. The list allows me to say, “This is what I intend to do with the brief time allotted to me.”

To a certain extent, the list reveals the heart. The tasks to be done are those we deem important enough to record and check off. Writing the brief is important for a variety of reasons, including professional and financial; completing the Jumble is important for entirely different reasons. The list distills the priorities into bullet points. If items like “write my next novel” or “knit a sweater” or “learn Italian” consistently fail to appear on the list over the course of days or weeks, their absence eventually compels reassessment. If these goals are important, they should be added to the list, and space should be made in the schedule to accommodate bite-sized pieces of them, with entries like “write 500 words” or “buy yarn” or “research language apps.” On the other hand, if these notions never quite make the cut, maybe it’s a sign that they’re not as important to us as we’ve thought.

I don’t know what my sixties, seventies, eighties, or nineties will bring. In forty years, it’s unlikely that I’ll care all that much whether I repotted the lavender or wrote the brief. But as far as possible, I’d like to look back and know that now, in my fifties, I spent my time and energy on things that had value to me. If those things include loving my family (human and feline), caring for my home, pursuing my professions, and serving my community, I suspect I’ll like that list just fine. 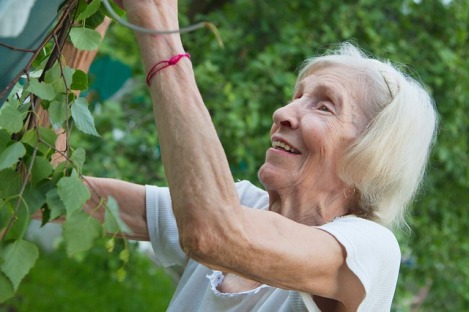