Home » Things I have learned so far » Celebrating 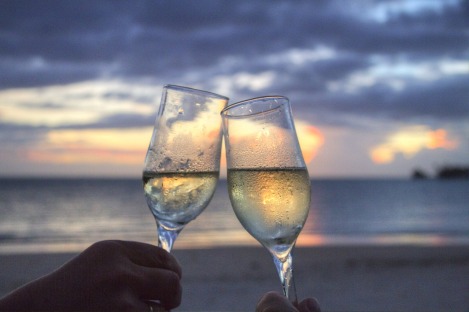 On Friday, April 13, 2018, I wrote the word I sometimes doubted I would never write:

I saved. I printed. I made Danny pose for his standard photo with the most recent draft, except that this wasn’t just a draft. 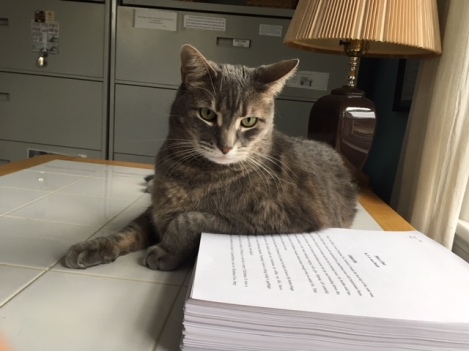 Then, I held the pages in my hands, and I said the words aloud for the first time in my life:

Yes, friends, it’s true. The novel I’ve been working on for years is finished.

Okay, maybe “finished” is an overstatement. Technically speaking, it’s a manuscript, not a book. It’s not published. It may not even be in final form, because if I succeed in finding an agent, she will undoubtedly want me to make changes. If she succeeds in selling the book, the editor will undoubtedly want more changes. Plus, I reworked a scene Thursday night, and the friend to whom I sent it with the inevitable “what do you think?” message may also suggest changes.

But right now, at this moment, as far as I can see, my novel is finished.

Finishing the manuscript is only the beginning. There are a thousand more things to do before an actual bound volume sees the light of day. I have my eye on a particular competition with a swiftly-approaching deadline, so I have less than two weeks to learn how to write a synopsis and then actually write it. I need to start seriously researching agents. I need to figure out how to write a query. Whether to attend a major conference this summer where I might make contacts. Whether I want an agent at all. Whether to publish the book myself or through some hybrid arrangement, rather than taking the traditional route. The pros and cons of all of this.

I recently acquired Jane Friedman’s new book, The Business of Being a Writer. I’m already overwhelmed by my ignorance. Jane writes in a direct, accessible way about dozens of topics I’ve never even thought about. While I recommend her website, blog, Facebook page, and other avenues of advice to anyone who wants to move from hobbyist to professional, I urge you to proceed with caution. There’s a boatload of information out there, and it can be intimidating to the novice. More importantly, all of it has to be filtered through the most important question: What do I want my writing life to look like?

As it turns out, writing the book was the easy part.

I admit to being sort of Marxist (Groucho, not Karl) when it comes to accomplishments: my first impulse is often something along the lines of “If I can do it, anybody can do it.” When I was graduating from law school, the dean told us not to worry, that we were all capable of passing the bar exam. He said, “If you doubt, just open the yellow pages [this was 1993] and look at the listings for attorneys. There are probably a thousand names there. You don’t have to get the best grade on the bar exam to be one of them. All you have to do is pass.” He was trying to keep us from panicking, but the message I heard was, You’ll pass the bar exam because it’s not that big a deal. So I took the exam, and I passed, and I became one of the thousand names in the yellow pages, because let’s face it, thousands of people pass bar exams every year, and some of them aren’t even particularly bright. In other words, I passed, but it wasn’t that big a deal.

Over the years, I’ve accomplished other things, but even when they’re legitimately impressive by objective standards—the first time I won an appeal, the first time I argued at the Connecticut Supreme Court, the first time I sold a story—there’s the part of my mind that says, Good job, but don’t get too worked up, because loads of people have done this and a whole lot more.

So even as I held my manuscript in my hands, the naysayer inside me cautioned, That’s a nice little accomplishment, but loads of people have gotten this far and never gone any farther. You still need to get it published, and then you need to get people to buy it and read it.

Sure, that’s true, every word of it. It’s also true that even if I get my book published, and even if people buy it and read it, one day I may see it on the table at the library’s semi-annual used book sale or the “Bargain Prices!” shelf at the bookstore (assuming it even gets into a bookstore). Thousands of books are published each year, and many of them won’t earn out their advances. Most of them you’ll never hear about—the titles and their (unknown) authors will slip quietly into literary obscurity.

In the fifth season of Sex and the City, a collection of Carrie’s newspaper columns is published in book form. Her publisher throws a lavish book party of the sort that practically no debut author gets anymore. After the party, a limousine picks her up. The driver, a young woman, asks what the party was all about. When Carrie admits that it was for her book, the driver’s enthusiasm bubbles over: “That’s amazing! You wrote a book!” Carrie’s voiceover muses, “It was amazing. Why did I need a stranger to remind me of this?”

Why do we so often need someone else to remind us when we’ve done something amazing? I know I’m not the only one who tends to downplay achievements. When was the last time someone commended you for something you’d done, and your response was along the lines of, “Oh, it’s nothing” or “It’s not that big a deal”? Is it because we’ve been taught that only selfish egotistical people brag? Because we don’t want to make other people feel bad for not having reached the same goals? Because pride is a sin and humility a virtue? Because we can’t see the difference between boasting and celebrating?

Here’s the thing: boasting and celebrating are not the same thing. Boasting says, “Look how great I am for doing this fabulous thing!” The emphasis is on the person, not the achievement. But celebrating says, “Be happy with me about this accomplishment!” The hard work or good fortune that led to the accomplishment may be lauded, but the true subject is what’s been done, not how superior the person is who did it.

I have friends who are excellent writers and who haven’t yet written books. Some are in the process and simply haven’t finished; others are still debating whether that’s how they want to spend their time and energy. The fact that I finished my first book doesn’t make me a better writer or a better person than they are. It just means that I’ve hit that particular milestone. And that’s worth celebrating.

Because when you’ve worked long and hard, and you’ve finally, finally gotten to the moment you’ve been dreaming about, and you’re holding the fruit of all that hard work in your hands, it doesn’t matter that there’s more work ahead or that other people may have done the same thing and may have done it more times or better or more famously. What matters is that you did it. This particular accomplishment belongs to you, and it’s real, and it’s amazing.

And you get to celebrate your ass off. 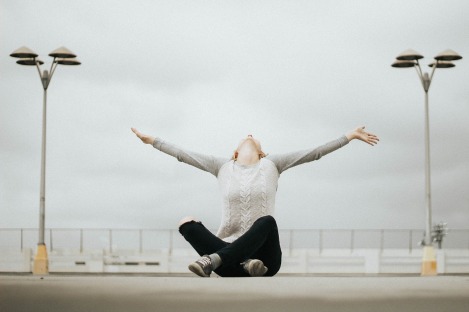