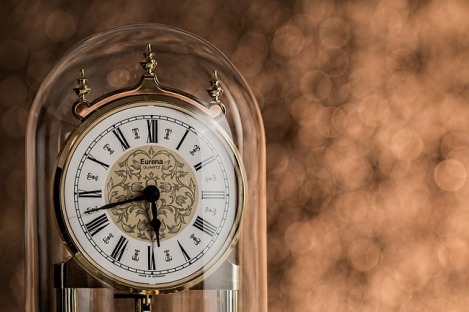 If I were to conduct a scientific survey of the reasons people who say they want to be writers don’t write, I’ll bet that this would be #1. There are plenty of others—family and work would likely rank as #2 and 3–but as often as not, I imagine those would be tied into #1.

It doesn’t help that books and articles routinely bombard the poor time-deprived writer with advice that seems impossible to follow. In predictable, frustrating, and often sanctimonious fashion, nearly all of them proclaim the same thing: Writers write. If you want to be a writer, you must find or make the time to write.

In a talk at the 2014 Festival of Faith and Writing, Anne Lamott said, “If you can’t give your writing an hour a day, I can’t help you.” In “The Getaway Car,” Ann Patchett told how she advises aspiring writers to “give this great dream that is burning them down like a house on fire one lousy hour a day for one measly month, and when they’ve done that—one month, every single day—to call me back and we’ll talk.” She added, “They almost never call back.” When John Updike was asked about advice he would give to aspiring writers, he included this nugget: “[E]ven though you have a busy life, try to reserve an hour, say—or more—a day to write.”

By this time, you’re probably having one of these reactions:

Good point, that one: what is the big deal about an hour? Do these advice-givers seize on it because it’s a nice, clean unit of time? Because they like round numbers? Because it sounds small enough to be manageable (“Anyone can find an hour a day!”)?

My best guess is D: All of the above. In my experience, though, there’s a far better reason to commit an hour to writing: because it’s substantial enough to accomplish something, but not so long that it feels overly burdensome.

Allow me to explain. In the absence of early appointments or catastrophes, my workday schedule begins with an hour for my own writing before I move to my desk to deal with other people’s projects. I settle into my chair, tea and bagel on the side table, and review the last paragraph I wrote. The phone rings. It’s across the room, so I set aside the manuscript and retrieve the handset so Caller ID can tell me if it’s an emergency, a client, or a telescammer. When I have confirmed that it’s not a crisis, I return to my chair, setting the phone next to the bagel. The blind cat (who has no problem hearing me slice a piece of cooked chicken from two rooms away) wanders into the room, searching for me. I have to speak his name several times and scratch his bed (next to my chair) until he locates the spot and makes himself comfortable. I return to the manuscript. Twitter bleeps a notification; curiosity demands that I check it. Someone who follows me liked my retweet. I resume reading. Another of the cats begins meowing from the front hall because she wants me to come out and pick her up (because God forbid she walk the eight feet to where I am). The notification bar shows two new emails. I click to ensure all is well with the clients.

And so on, for the better part of the first ten minutes. It takes that long to settle into the project, to shepherd my mind back to the task at hand. To tune out the minor demands of the world, feline and electronic. To remember that this work is important, that it deserves the respect of my attention. To shift my thoughts to this singular hour. To move into the story, among the characters. To focus on the ideas, the language, the structure. To indulge in the richness of contemplation and expression. To be a writer who writes.

This doesn’t mean it’ll be smooth sailing and unbroken concentration for the remainder of the hour, because life happens. The tea gets cold and needs reheating. A friend drops by with a monstrous zucchini from her garden. A cat hacks up a hairball on the sofa. The phone rings, a client calling three times in five minutes because I didn’t pick up the first two times.

After every interruption, whether addressed or ignored, comes the need to corral my attention yet again so I can return to the world of the story.

That’s why an hour. Because realistically, no matter how hard you try, getting into the work requires time. And when (not if) interruptions happen, it takes additional time (and effort) to get your mind back to the project. I set aside an hour for writing, but the truth is that I’m doing well if the actual work is fifty minutes. The rest is logistics.

There may be a scientific reason that so many writers recommend writing an hour a day, but I suspect the real reason is that it’s enough time to accomplish something meaningful, but not such a huge commitment that people with day jobs and family obligations will throw in the towel before they even begin.

But what of those who can’t devote an entire hour to writing? (By “can’t,” I mean “it’s truly impossible,” not “it’s inconvenient because I’d have to get off Facebook, turn off the television, stay home instead of joining friends for coffee, etc.”) Does this mean such people can never be writers? Of course not. But it probably means that producing work–especially publishable work, if that’s their ambition–is going to take them longer, because the simple fact is that the smaller the chunk of time you allot to a project–any project–the longer it will take to complete it. Think about it: if I spend five minutes each day painting my living room, the job will take months to finish but if I devote eight hours a day to it, I’ll be done in three days.

Which is not to say that a smaller writing session has no value–far from it. If that’s the time you have, by all means use it. One author (whose name escapes me) spoke of how she wrote her first book in the car during her kid’s soccer practice. While I don’t have that particular demand on my time, I do have court-ordered deadlines and impatient clients. Even on those days, I’ll still try to squeeze in half an hour of writing time. I won’t accomplish as much, but I’ll maintain the habit of writing, keeping the story fresh in my consciousness so that my unconscious can continue to work on it when I turn my attention to other matters. In On Writing, Stephen King says that he used to tell interviewers that he wrote every day except for Christmas, the Fourth of July, and his birthday, because he didn’t want to sound like a workaholic dweeb, but that was a lie. He says the truth is that when he’s writing, he writes every day, workaholic dweeb or not.

At the other end of the spectrum are those who decry the hour as too little time. If they can’t devote a block of time–three or four hours–to their writing, they don’t consider it worth doing at all. That’s their choice, but in reality, few writers enjoy those blocks on even a semi-regular basis. Most of us have to make do with smaller segments. If you insist on writing only when you have several hours available, you may need to reconcile yourself to the likelihood that you’re not going to write very often or very much.

Another reason to set a target of an hour a day: hours add up. One hour a day, five days a week (I’m giving you weekends off), is five hours of writing. (So speaketh the math whiz.) Do this for a year (taking holidays off–assume that works out to two weeks’ vacation), and you’ll have written for 250 hours. A person can write an awful lot in 250 hours, even allowing for hairballs and zucchini. A handful of short stories, a cluster of essays, a sheaf of blog posts. Even a full-length work, like a memoir or a novel. (Torey Hayden wrote her first book, One Child, in eight days, but I think we can all agree that’s a tad unusual.) With all respect to late-night television, if it’s a choice between writing a novel and watching 500 reruns of Friends, ask yourself which one will get you closer to your goal.

If you haven’t tried writing for an hour a day on a regular basis, I encourage you to give it a whirl. You may be surprised at what you can accomplish.

P.S.: It may turn out that you do better with a word count quota than a time-based requirement. This afternoon, I had the great good fortune to chat with Lisa Scottoline and Francesca Serritella at R. J. Julia Booksellers. When I asked them what they thought about the idea of writing an hour a day, Lisa said that her quota is 2,000 words per day. Considering that she’s published nearly 30 novels (and has two more coming out this year), as well as ten books of essays with Francesca and heaven only knows how many newspaper columns, I think we can all agree that her system works very well for her. Francesca, who just went to contract on her first novel (yay!), indicated that the time-based approach doesn’t work well for her, either. We’ll deal with the word count vs. time debate in another post; the most important thing is that, no matter which approach you follow, you write.

2 thoughts on “The Magic of the Hour”